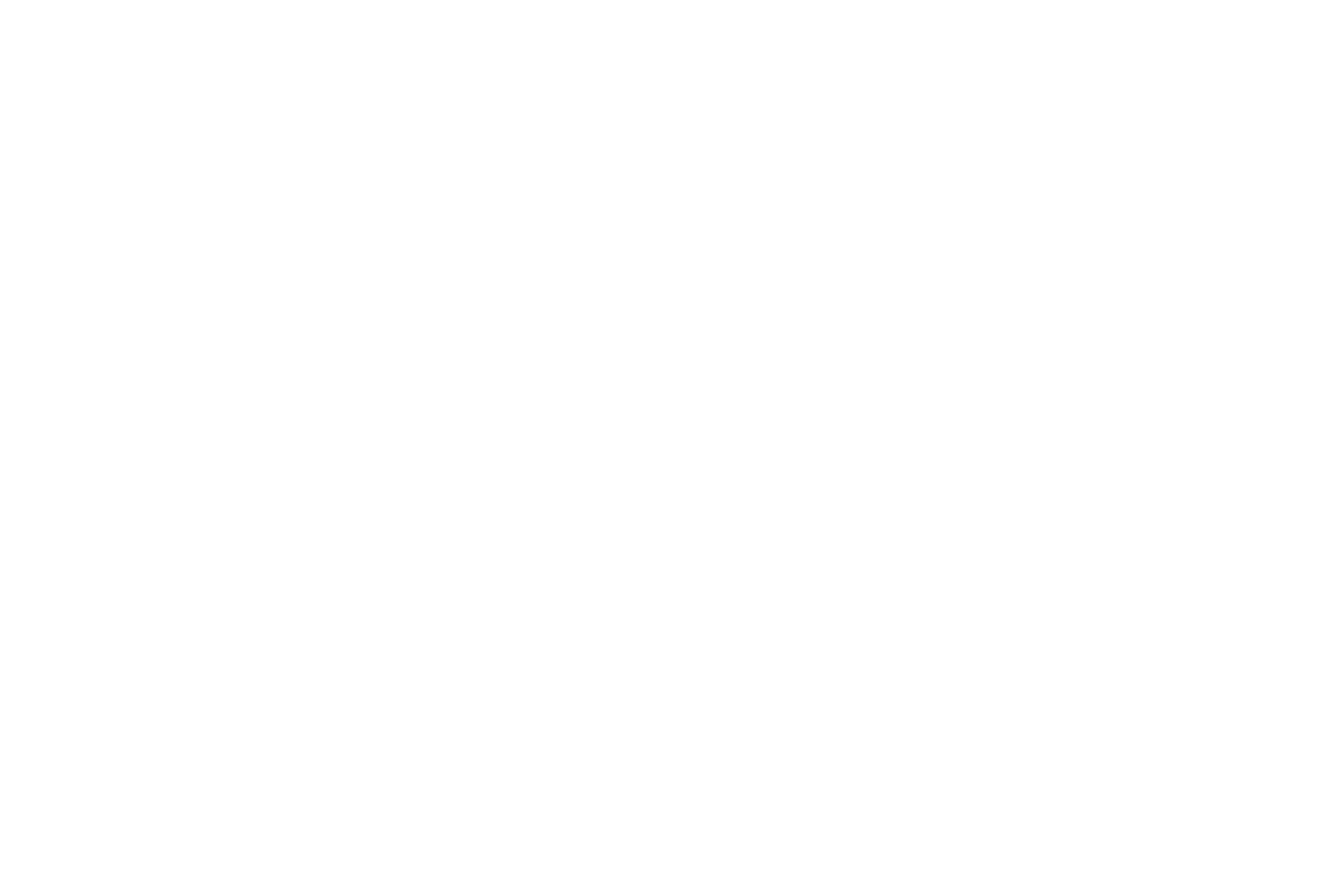 By Fabian
Posted 13. October 2018
In Travel
Next Roadtrip Tasmania – A landscape like in a picture book – # 5 Work and Travel Australia 20182018-10-132021-01-08https://fabianxarnold.de/wp-content/uploads//2018/07/fabian-x-arnold-instagram-signature-influencer-brand-sport-fashion-fitness-man-black-tiny-border.pngFabian x Arnoldhttps://fabianxarnold.com/wp-content/uploads/2018/10/campervan_camper_van_freetheuniverse_orange_blue_kngeru_kangeroo_wallabie_australia_australien_best_life_route_tasmanien.jpg200px200px
14
4

After our road trip to the Great Ocean Road I arrived back in Melbourne, I had no idea what I should get up to while being here. I went back to the hostel and reunited back with my mates and thought what I should do with them while I’m here, also because the hostel mates would fly back home to Germany next week, which was unfortunate, we couldn’t plan a new road trip. The following road trip came around the corner much quicker than I thought! 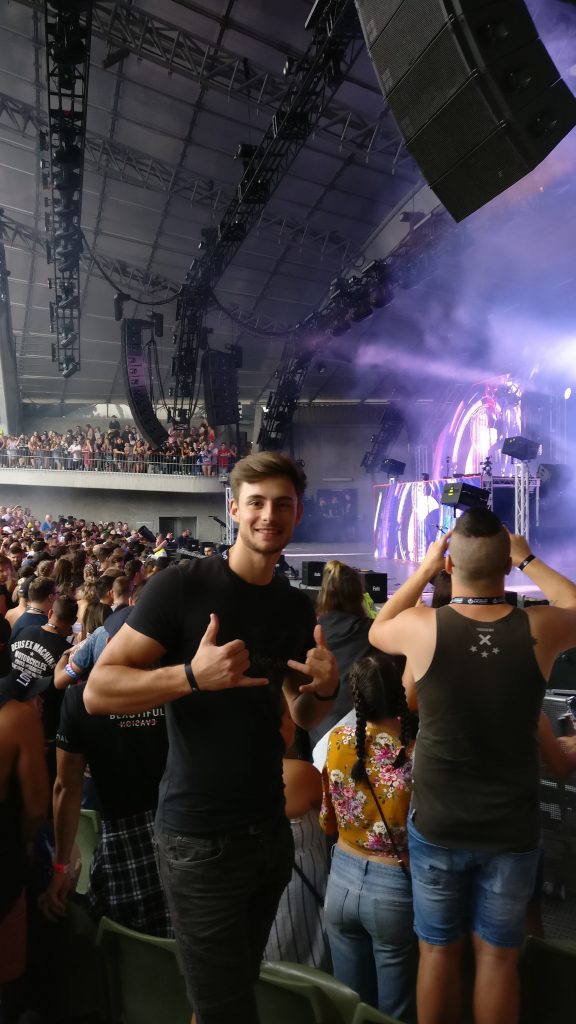 The next big event in Melbourne was Road to Ultra 2018. I got tickets for myself and two of my mates from a good friend I had met whilst in Melbourne. I was so excited, because it was my second time at a festival. In the past I have visited a color festival in Germany, which was great, unfortunately that was my last appearance at a festival.

More than 50,000 people were expected to come to the Road to Ultra Festival in Melbourne. The DJs Axwell and Afrojack were there as well.

Being sneaky and coming up with a lie, I snuck backstage and managed to have a small conversation with Axwell. I also witnessed the grand finale of Axwell live on stage. I stood about 5 meters from the DJ desk and had more than 50,000 people in front of me! I could not believe it, It was awesome and I recommend everyone to go to this festival. Somehow festivals have never really touched me but after this experience now I’m looking forward to the next one, festival fever has seduced me.

My worst time in Australia

2 days later I was alone in Melbourne, because my two mates left Melbourne and flew to Germany. First, I thought, “Okay, I’ll work on Instagram, edit some pictures and take a look at the city.” After two days I still haven’t found a new Travel mate, I was a bit queasy, I wouldn’t normally say I was having a minor melt down, but within two days I didn’t speak a single word and therefore needed someone to talk to and let my emotions out. I picked up the phone and called my parents, calling best mates from Germany Hagen Richter and Patryk Stawinoga.

This helped me a fair bit and started to calm down a little.Since I had found no new travel Mate in this hostel within three days, I decided to change the hostel and try elsewhere to find a travel mate. The new hostel was the best decision I had made in the last couple days, within 24 hours I met 3 new friends, with whom I am in very good contact still to this day. One of them is Mirko, whom you already know from my Instagram Stories, I got along with him right away and started planning our next trip to Melbourne and around Australia. 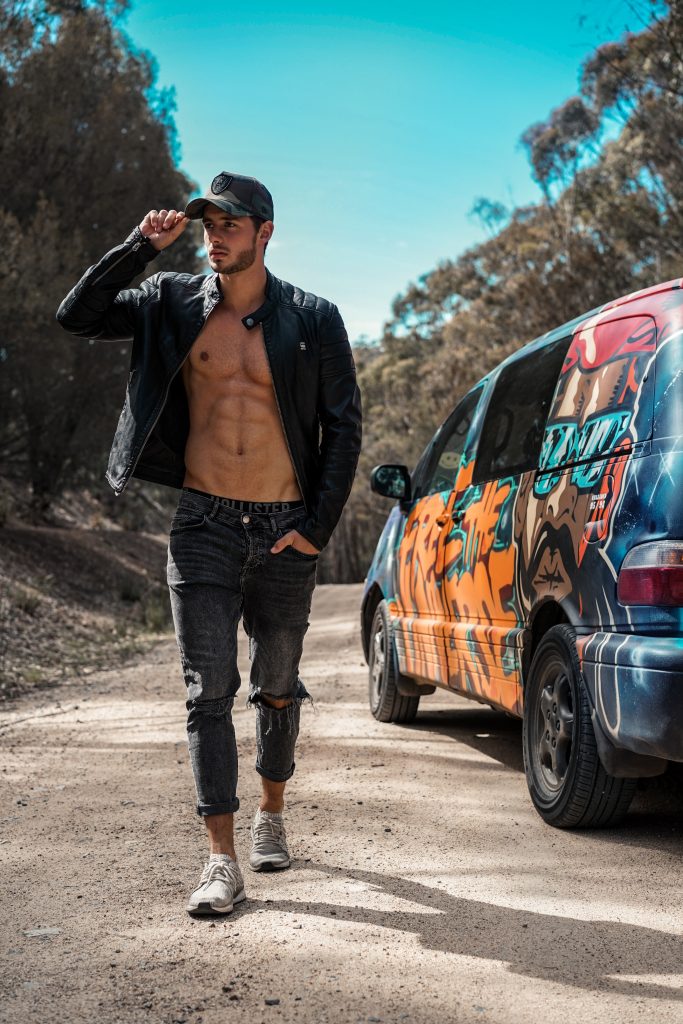 One morning we came up with the idea to fly to Tasmania, before we are going to travel the east coast. We looked for flights, an accommodation for the first night and a campervan to travel through Tasmania.It was March, during the day temperatures were fine probably around 22-24 degrees, on the first day we bought only a blanket for the Camper Van and thought that would be plenty, but we were wrong. By nightfall it had cooled to 5 degrees and it was so cold that we had to turn on the engine to use the heater. In addition, we were forced to be closer to each other to try create some heat. The next day we bought two new blankets directly, so that situation would not happen again.

What is to see in Tasmania?!

Since I hadn’t seen much in Australia yet, it was my plan to see all the beautiful nature of Tasmania. Yes, of course we were clever enough prior to plan to see everything in Tasmania, as described in my last blog post, we made a plan on how to do our road trip. We considered first to travel the east coast, where many beautiful beaches are. In the second week we wanted to see the west in which the mountains and lakes sat. We read earlier that Tasmania has the clearest air and 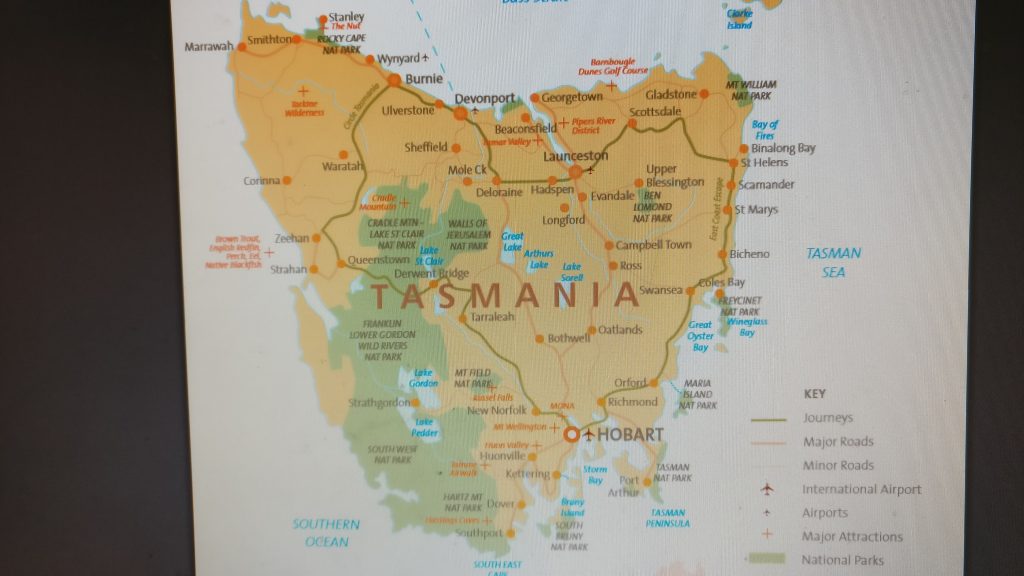 the clearest water in the world, so we were very curious about what we would encountered there. You can see our itinerary in the screenshots, we literally drove a large circle counterclockwise. 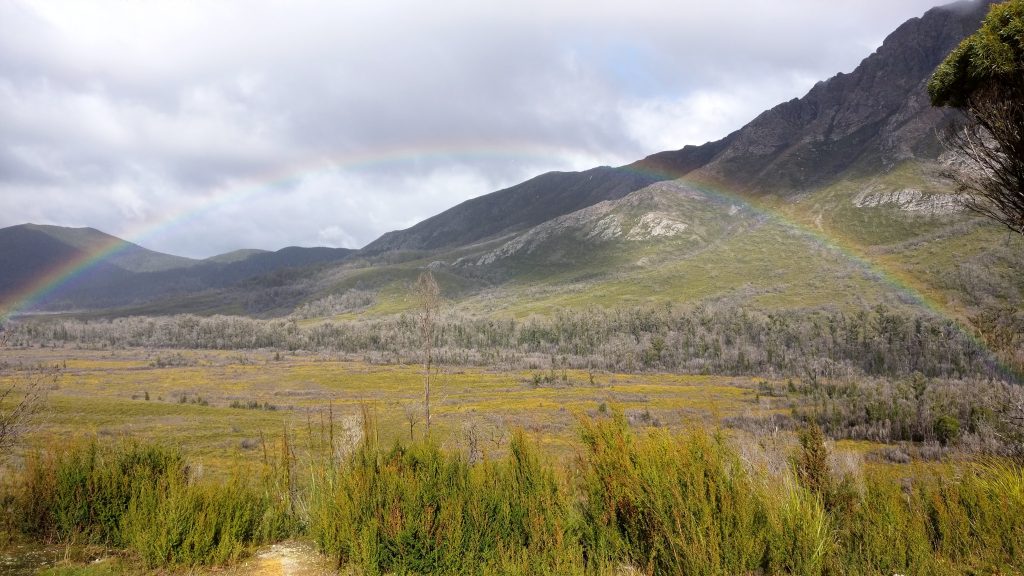 In addition to many other beautiful places I had two highlights in Tasmania: “Bay of Fires” and “Wineglas Bay”.

Bay of Fires has a white beach, as I had previously only seen in pictures, I thought something so amazing like that doesn’t exist, that these pictures would be edited only with Photoshop. As we walked along the beach, the sand creaked under our feet, it was unbelievable, the water was crystal blue, the air temperature was only 15 degrees despite blue sky and sun. Mirko was not willing to go in the water, but I decided to put on my swimming trunks, and jump into the water whilst filming with my GoPro.Tip: For those who want to go to Tasmania: Definitely plan a day for Bay of Fires to enjoy the beach! 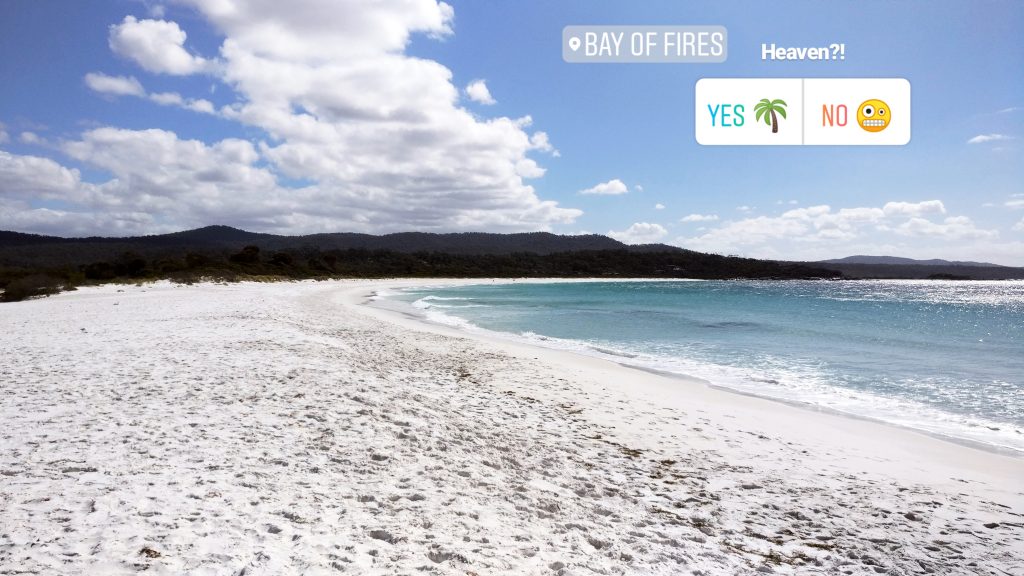 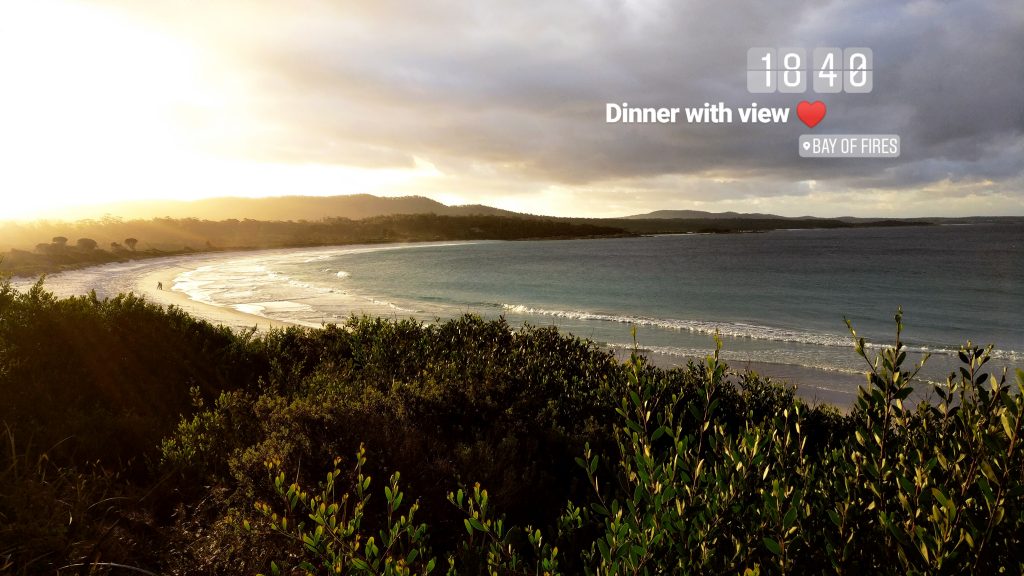 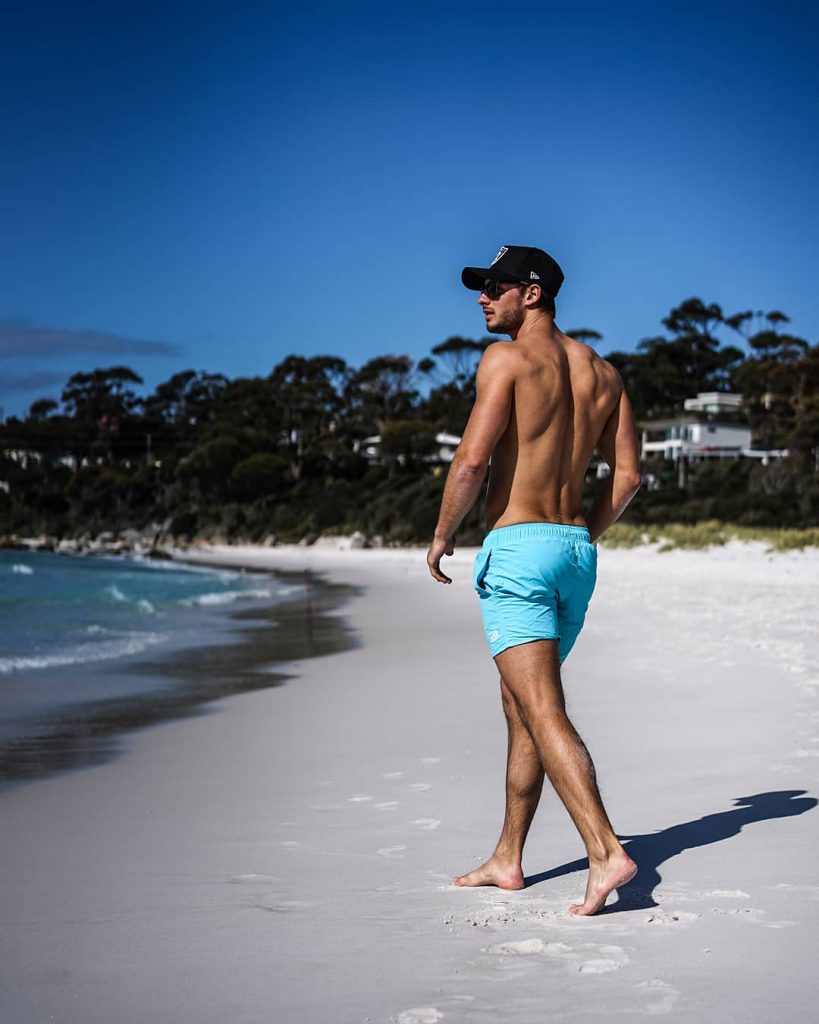 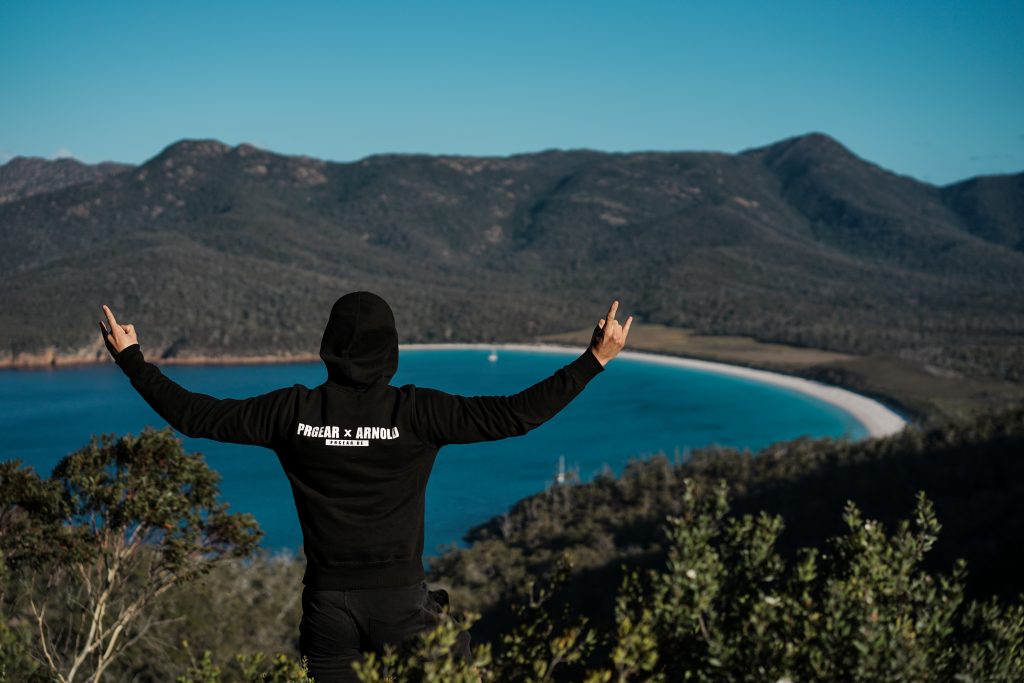 The Wineglas Bay is as the name suggests, a bay shaped like a wine glass, to get there you have to hike for about an hour. However, if you decide to just watch Wineglass Bay from the mountain, it’s about a 30 minute walk. Unfortunately we did not have much time and therefore could not really enjoy the panorama, but in when there is great weather it’s definitely one of Tasmania’s highlights.

Of course, there were many other beautiful places on the east coast but I would be writing for hours and hours this was just a short ride on the East Coast, let your thoughts wonder and stop where you want. In the north of Tasmania, there was not that much to see! Lots of beaches, a few cities, a few sightseeing points, but nothing that amazed me with excitement 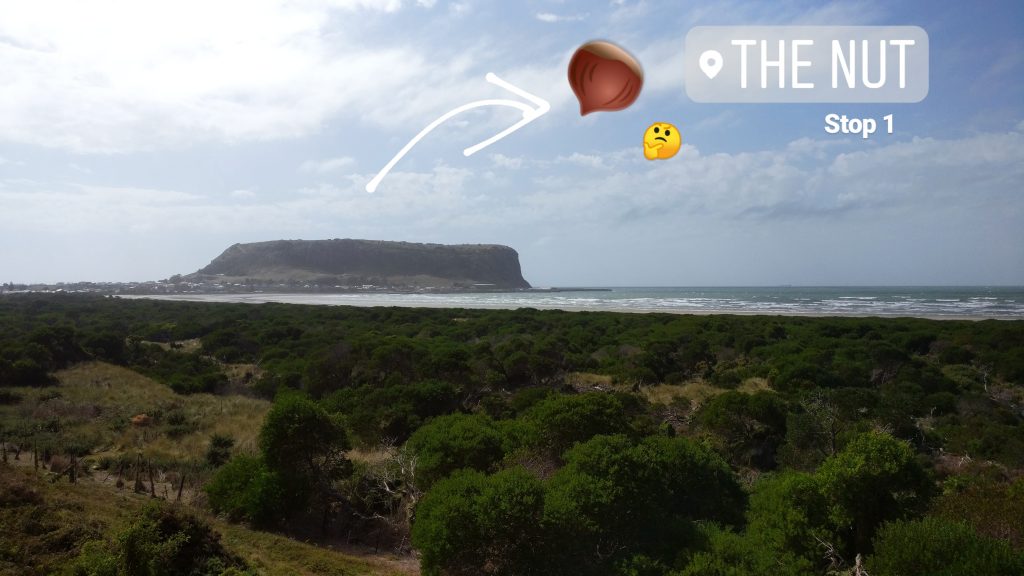 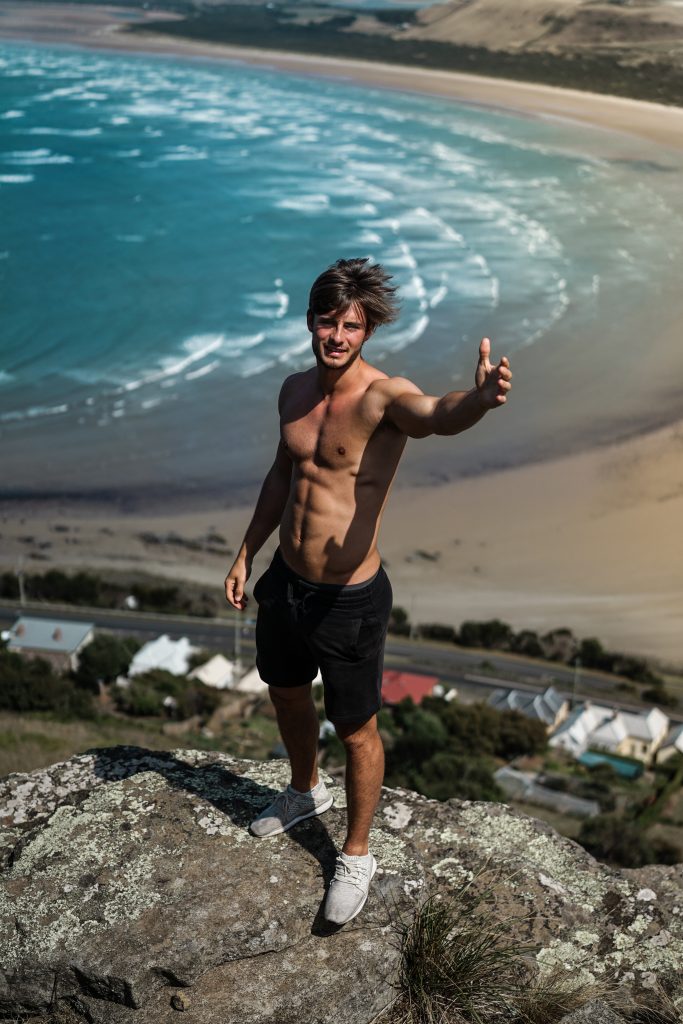 The next thing I remember is the mountain “The Nut”. It is the most northern point in Tasmania. The mountain is at the last corner of the land mass and looks like a nut. It is surrounded by cliffs and is completely smooth on top, with a air lift you can be transported to the top and start your walk, the trip takes about 45 minutes, during the walk you have a beautiful view that looks over the ocean and the coast of Tasmania, this is definitely a “must do” in Tasmania. As the trip started we were sighted with many national parks, First we approached the “Tarkine Wildernis”. We drove for over 100 km on a gravel road, the road felt like never ending, you can picture it a long road with trees that filled either side. We also experienced a beautiful sunset, we sang songs and also told each other funny stories from Germany. 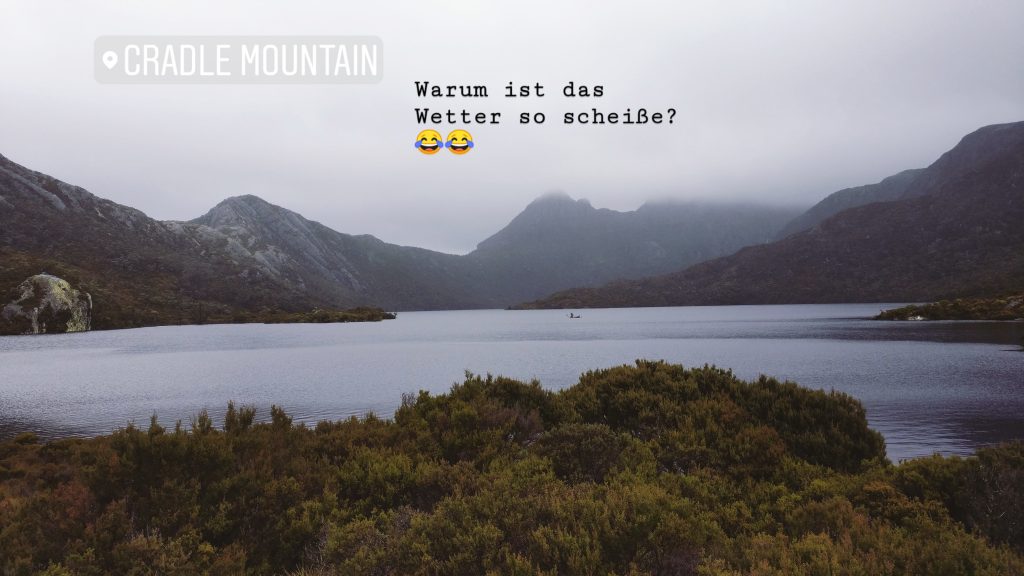 The next day were the worse, we experienced bad weather, It was only about 8 to 15 degrees throughout the day and it rained consistently. Therefore, we could not really enjoy the whole beautiful panorama, do not hike and do not go swimming.The whole beautiful highlights such, we visited Lake St. Clair and Cradle Mountain, but we could not go hiking and enjoy nature, we literally just drove around all the time, virtually viewing all of the sightseeing points in western Tasmania, which we then drove back to Hobert, the largest city in Tasmania two days earlier than originally planned. The last two days we went to the south again, visited a cave and planned a beach day, altogether we drove about 3200 km and literally saw everything you can see in Tasmania.

Stranded in nowhere in Tasmania without reception …

Alas, I almost forgot to tell you that, we borrowed our Camper Van from Wicked Campers the car was a 20-year-old Toyota that had almost fallen apart. In the second week of our road trip we got stuck with our car, (Ok I admit we were not always careful with the car) often we were stupid but had loads of fun. We drove with 80 km / h on the gravel road and felt like rally drivers, until the worse thing happened! We got stuck somewhere in the middle of Tasmania, Ironically, the ass of the world, where we had no reception and no Internet with our phones.

We started up a mountain with our Camper Van and suddenly it started to smell funny, like  burnt rubber or something, then it started to smoke, the engine had switched off and wasn’t turning back on. My Travel Mate Mirko was starting to panic but I took it easy and made fun of the situation, luckily we had enough to drink and eat for the next few days.After about 20 minutes, a pensioner couple drove past, which we could stop the pensioners, however, were afraid of us, the male driver pulled up wound down the window just enough to see his forehead, they were both so afraid he even locked the doors. The couple unfortunately couldn’t help us, we only asked them if we could ride to a point where we have internet, but that was probably too much to ask …After another hour had passed, approached a large 4WD, thankfully it stopped, out stepped a male who was a mechatronics engineer which he was with his family. He briefly looked at the engine and said that the air conditioning had blown … We tried again to start the engine and it worked! Was magic, thankfully we could finally continue.

If you are in Australia from November to January or in Melbourne, you should definitely drive to Tasmania for one to two weeks. Tasmania has beautiful beaches to the east and beautiful nature (mountains and lakes) to the west. At this time you should actually have luck with the weather and you can fully enjoy the panorama. However, if you have been there before, it is not a “must to do” for once again. I still want to go to New Zealand anyway and many have told me that Tasmania is similar to New Zealand.

For us it went first back to Melbourne and from there with a camper van to Sydney. But I’ll tell you more in my next blog post. You can also check my Instagram account @fabianxarnold or if you have questions you can email me. I look forward to your feedback and wish you a nice time.

Greetings from Australia your Fabian!