By Fabian
Posted 20. July 2018
In News, Travel
The flight and the arrival at the other end of the world (Australia) – # 2 Work and Travel Australia 20182018-07-202021-01-08https://fabianxarnold.com/wp-content/uploads/2022/12/fabian-x-arnold-instagram-signature-influencer-brand-sport-fashion-fitness-man-white-small-1.pngFabian x Arnoldhttps://fabianxarnold.com/wp-content/uploads/2018/07/flufhafen_airport_mnchen_sydney_melbourne_travel_backpacker_backpack_down_under_fashion_style_backpacker_with_style.jpg200px200px
14
2

The day finally had come. I was leaving my usual environment, my home, my family and my friends behind me for a year. Was I excited? NO! I still had not realized that in a few hours I would be on a plane to Australia. At lunchtime, I ate with my family in our usual restaurant and then everything went incredibly fast …

The day of departure to Australia

Usually I’m always well organized, but that day everything was so messy. I had to say goodbye to so many people, that I messed up the time schedule and my bag was not packed until half an hour before I was leaving for the airport. Of course I had everything layed out, but hadn’t checked yet to see if it would fit in my backpack … and of course it was too much to fit. I had to decide within a few minutes what I would leave at home and what I would take with me on my trip! With much stress and effort I repacked my bag, but there was no time to look over what I had packed again.
I had to get to the airport immediately, otherwise I would miss the flight. When one thing goes wrong, everything does, so of course there was a traffic jam on the highway. My navigation system told me that I would not make it in time to the airport for my flight. But as if by magic, the traffic jam resolved and I arrived at the airport on time. Luckily my parents were already at the airport to welcome me; because they were on their way home from Austria and they wanted to say goodbye to me at the airport, as there was only very little time!

The flight to Australia

The time I spent at the gate, on the plane and in the first few hours in Australia was where I have been most afraid in my life. Alone and on my own with the thought that I will go home in a year! Luckily I had a travel mate from the time I arrived at the airport, so those of you who would like to have a travel mate for the flight and the first days of your trip, definitely stop by www.urlaubspartner.de and have a look!
My flight to Australia took about 23 hours with a stopover in Delhi, India. The first 7 hours on the plane I had survived without problems. No little kids screaming or anything else that could bother me (well, except for the 7 hours). The second half of the flight was not as good as the first. I had a mother right next to me with her baby, which cried throughout the whole flight. But I survived! In order to not get jetlag at all, I arranged for my first flight to depart in the evening (Australian day time) and to travel through the night forcing myself to stay awake. Then, only in the second flight (Australia night time) I let myself sleep. So once I landed, I managed to get straight into the Australian rhythm.

The arrival and first days in Down Under 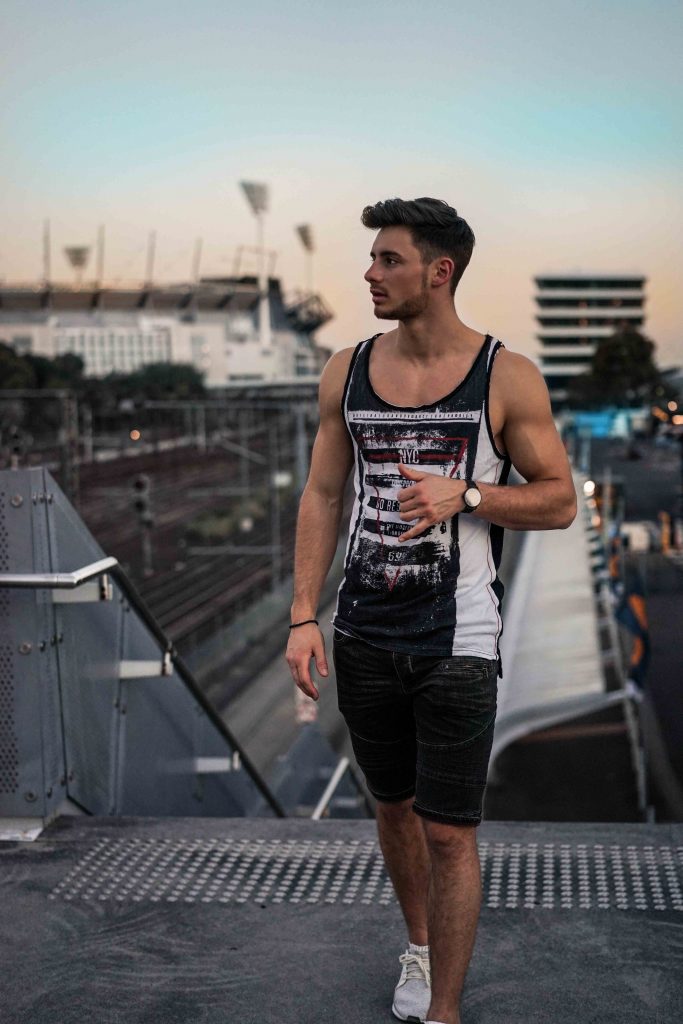 When I arrived in Melbourne, Australia, it was only 7 a.m. The sky was overcast and it was around 20 degrees. I was overjoyed to have arrived in Australia and could hardly believe that I was at the other end of the world, so far away from home.
I then took the bus, which was heading towards the city center, to the first hostel. When I arrived in the city, it felt more like being in London or in another city, but not Australia. The sky had turned blue in the meantime and it was 25 degrees, but it somehow didn’t feel like Australia. That was not what I had imagined.
Arriving at the hostel, I had already met the first backpacker within a few minutes. I was really happy with the hygiene of the place. Of course you can not expect it to be 100% clean, but basic hygiene was definitely there, no cockroaches or anything like that! The only thing that bothered me in the first few days was the kitchen. I could not believe that people could cook properly in a hostel kitchen! Everything was filthy and really disgusting, but after several days you got used to it and learned to handle it.
I was in a 6 dorm bedroom and luckily had roommates who went to work, meaning it was always nice and quiet and I could sleep well. Since it does not bother me to sleep with strangers in my room, the “Hostel Life” was not a problem for me. The only thing I missed next to a clean kitchen more than anything else, was a toilet that only I or my family uses, luckily I was not born a girl, guys definitely have a much easier job to survive on such toilets.

What else did I had to organize? In the first days I had a lot to do and organize, such as get me an australian sim card, apply for my tax code, etc …

Step 1: Which SIM Card?  and how did I get one in Australia?

Getting the australian SIM card was the first thing I did because you need them for everything in Australia! For that you have to research which provider is best. There are three major providers offering all prepaid SIM cards. That means you have a contract for a month, then you have to extend it yourself. That’s what every backpacker I’ve met has done.
The largest provider is Telstra, Telstra has by far the largest network coverage in Australia and even `down under` you have reception. Optus is the second largest supplier and obviously a bit cheaper than Telstra. Vodafone is really great for the price. Unfortunately, with Vodafone, you only have reception in cities and if you are on a road trip, the majority of the time you have no signal. I would recommend you use Vodafone for cities and as soon as you are on a road trip just use your Telstra SIM card for this month. Since the cards are free, I would just pick a SIM card from Vodafone and one from Telstra! So you are on the safe side and can still save your money! Of course, the offers can always change, I paid 40 AUS $ per month. For that, I got 18GB at Vodafone in the first three months and then 9GB. At Telstra you get about 5GB. Voice and SMS Flat in the Australian network was in both rates included! Just make yourself aware which offers are available by looking on the internet beforehand, then you can simply buy the SIM cards in the nearest kiosk (7Eleven).

Step 2: How to apply for my tax number in Australia

The next step is to apply for the tax number (TFN). For this you need your Australian phone number and a local address. Just use the address of your hostel. The TFN will be sent to you within 7 to 28 days. If it does not arrive, which is often the case, or you’ve changed the hostel you can also call the authority and they will give the TFN to you. It takes a few minutes to apply and you can easily do that online on the following page: https://iar.ato.gov.au/IARWeb/default.aspx?pid=4&sid=1&outcome=1

To complete your bank account and pick up your card, you simply go to the nearest branch and follow the instructions: Mostly, a bank employee sits down with you and explains it to you. While you’re at it, be sure to ask for a superannuation account! It’s like a retirement account you need to work in Australia. The employer is required to pay X% of your salary into this account. Just before you leave Australia you can apply for the payout, since I do not want to live in Australia until you can get the pension: DWestpac Bank will apply for this account directly with you. The Commonwealth Bank can help you with this, but you have to open it online yourself.

The next blog post is about my experiences and recommendations in Melbourne. Check it out!!!